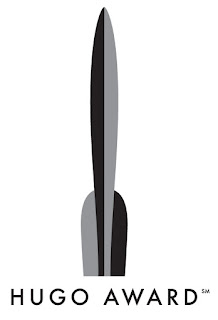 My writers group, Leasspell, attended this year's WorldCon (affectionately called Sasquan because it took place in Spokane, Washington). It was my first WorldCon. I came with two goals. First, moderate a couple of writer sessions, which went very well. And second, not to accumulate an array of ribbons. Sadly, I still had an array of colors dangling from my badge by the end of it all. Wonder what I could have achieved if I tried.

It was also location of the first WorldConGate (also called the Hugos in certain circles).

Quick recap for those who don't know: The Hugos were invented for Science Fiction writers, probably by Science Fiction writers who were tired of getting snubbed by every other award. Over the years, other categories crept in (like Fantasy or TV or movies or whatever). So, a bunch of sad puppies (aka Sad Puppies) decided to protest this diversity, and when it occurred to someone that they weren't protesting with enough outrage, start another competing ill-behaved group (aka Rabid Puppies). Long story short, five award categories had no winners. Or something like that. The details got lost on me.

The general murmur at the Con was as follows:

1) Neither the Sad Puppies nor the Rabid Puppies did anything wrong, according to the rules of the nominating and election process.

2) The rules need to be changed.

What the puppies don't realize is how damaging this all was to the Hugos in general. For example, my husband reads a lot. I mean, a LOT. He used to seek out Hugo nominated or winning works since he believe that meant something; that these books were deemed the best of the best by the writers and board of the awards. He used to believe they were the Academy Awards of SF/F. Now, the cat's out of the bag. The Hugo is nothing but some readers saying “I liked it” and some other readers saying “Oh, yeah, I read that. Sure. It's the best,” without having read all the other nominees, and if some other group of readers doesn't like the works selected, they can hijack the whole shebang.

Now the award means nothing to him. I don't believe he's the only one.

That said, here's this silly author's take on what can be done to make the Hugos be what they ought to be.

First, they need to remove the “no award” from the ballot. Period. If a number of works got on the ballot (and I think we all can agree that most authors work their little hearts out), someone should win.

Second, the Hugo board needs to be bigger. And only they get to vote for the winner.


Let's hope they get that all worked out in the not too distant future. Like NEW ORLEANS, 2018!