Ah, the yesterdays of Thanksgiving.

When I was a kid, every year we celebrated the end of the year trifecta. You know, after the drudgery and woe of school beginning, we looked forward to Halloween, Thanksgiving, then Christmas, and each of those holidays included house-wide decorations, everything from store bought items to things we kids made ourselves in school. Do you remember the turkeys made from your hand print? The construction paper pilgrim hats? The colorful corn cobs that hung on the door?

Thanksgiving was a great holiday. However, as the popularity of Halloween and Christmas grew, it squeezed down Thanksgiving to “that day where we're forced to go to Auntie's house – but, hey, it's only once a year.”

Here's why Thanksgiving's gone away: We do such big shows with Halloween and Christmas (lights and animatronics and trees and sound and parties and on and on) that, frankly, we're too tired to be bothered with that third one, the one that's crammed in the middle. Face it. Due to our absolute exhaustion, Thanksgiving got reduced to a day of football, big eats, and coupon clipping for tomorrow's big sales.

There are those who claim we should get rid of Thanksgiving; that it's just a way to make ourselves feel good about the colonization of America so we can forget the subsequent annihilation of the Native American population. Hard to argue that.

However, we aren't the only country that celebrates Thanksgiving. Canada also has a holiday where they take a break, gather the family, and give thanks for all they have – no “Indians” involved in their bit of history. In fact, six other countries, Germany, Japan, Grenada, Liberia, The Netherlands, and Norfolk Island, have some kind of Thanksgiving festivity. Sometime in the fall, after the harvest, they gather with friends and family and food, all to be grateful for what they have.

It's time to restore this poor holiday, or at very least, celebrate it for what it was intended to be. Thanksgiving. I'm sure, if most of us look at our lives, our families, and our friends, we consider ourselves more than just lucky. We're crazy advantaged, crazy blessed, and crazy fortuitous. That deserves more that one day, or one meal. It deserves a bit of time for planning and preparation. It deserves a little decorum and decoration. It deserves some thoughtfulness and introspection. Be that at home, or at your job, or in all the malls across America.

Take a little time to remember why we're celebrating it at all. No, I don't mean the pilgrims. I mean you. Your achievements. Your abilities. Your life.

That's the best reason to be thankful.

The Mindless Rant of a Bug 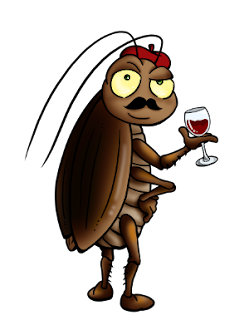 In case you haven't been paying attention, there's a whole new me. Well, not a new me, just a construct of the Great Hercule. The monkey who owns this blog finally paid a real artist to catch my best side, instead of that insipid line drawing she made.

Just because I look nicer does not, in any way, mean I am nicer. No. I am still a cranky cockroach with a, how do you say…? A chip on my shoulder!

I have my own blog I call In A Bug's Mind. I find some of the most inane, insane, and outrageously things you people do, then expose them—you—to your peers. This bring me great joy. There are a number of articles, however, I have not shared due to some kind of circumstance. Movies or video clips, for example, are taxing to my tiny laptop. Or a webpage so full of pictures and stories that I simply cannot select a single one to expose—THEY MUST ALL BE EXPOSED.

So I'm usurping this blog to share with you some articles that did not make my blog.

I have said, many times, how astounded I am that you all rule the world. First, you have to survive your idiotic childhoods to get far enough along to even vote. And I have proof this is tricky for you. I give you exhibit A. Moron children. <-- CLICK THE LINK, YOU FOOL!

I am also astounded at the level of helplessness that is prevalent among you. Yes. She called the police to open... a jar. Not like the cops have any real work to do. "The resident was quoted, 'I had no idea that's how I got mail. I thought it was magic.'" Idiot.

Or this story about the man who had a heart attack while mowing his lawn. After saving his life the paramedics proceed to do his yard work. On second thought, that's actually a "feel good" kind of story. I hate feel good stories.

Which brings me to what you chimpanzees do on your free time.

In case this is not clear to you, a man, using his GPS, took a six-month trek about Japan to proposed to his beloved. You know what she said? "No. You could have spent that time earning us a nest egg so we could move out of your parent's basement and rent us a real apartment!" Um. Okay, truth be told, that is what I would have said.

The following video disgusts me. I love that. I can't help but watch it repeatedly, over and over. In fact, I chase Winki around the house while singing it. (LANGUAGE ALERT…. F-bomb at :07! You've been warned.)

Not all I see irritates and annoys me. I have to say about about ten percent of the muck out there brings a smile to this woeful, little bug. I give my “shout out” to the following:

This lovely galleryof mushrooms (what can I say? I love the world of the small. It is what I see everyday.)

Awkward yeti, which exposes the humorous conflicts between the heart and the mind (I love the heart… who knew?).

Bloom county 2015, (a Facebook page) however, I worry about what they'll do next year…

Now. Add my blog to your RSS feed. You banana-eating, nocturnal-drooling, bi-pedal bozo.
No comments: